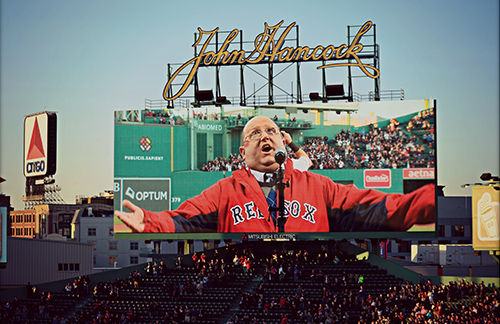 John Lema was 9 years old when his parents drove him to his first Red Sox game at Fenway Park in their bright yellow AMC Hornet wagon. On April 27, nearly 40 years later, he’ll return to the historic ballpark with his parents – this time in a limo.

Lema, 48, was selected to sing the national anthem before the Red Sox face off against the Atlanta Braves, a celebration of his hard-fought battle with brain cancer. After surgery and a year’s worth of chemotherapy, the Peabody resident – who was born legally blind – is feeling fantastic and grateful to be alive – thanks in large part to his care team at Lahey Hospital & Medical Center in Burlington.

“I never could have imagined this would happen,” said Lema, a lifelong baseball fan who especially enjoys cheering in the stands at Fenway, even though the players look like blurs due to his vision condition. “It has been a long road, and it’s an incredible honor to be able to do this.”

Aside from his blindness, Lema never had any other health issues until he collapsed and started seizing while at work in November 2012. His boss and friend, Erin Wilkins-Gaudet, called his parents while others called an ambulance. A scan at Lahey revealed a tumor the size of a clementine on the right side of his brain. Two weeks later, neurosurgeon Haran Ramachandran, MD, successfully removed the tumor. Lema returned to work and his other commitments during the course of his chemotherapy.

Now, three and a half years after his diagnosis, Lema receives brain MRI scans every six months and currently has no evidence of tumor recurrence.

“He is doing amazingly well,” said Gina Kolak, his nurse practitioner, who handles his follow-up care along with neuro-oncologist Brian Scott, MD. “He has maintained such a positive attitude throughout the whole process. It’s inspirational.”

Lema, who had some voice training in college, had always performed the national anthem at the opening ceremony of Wilkins-Gaudet’s annual family gathering. The friends often joked about him singing at Fenway. Then Wilkins-Gaudet nominated him this March, and he was selected to sing at one of the season’s 81 home games.

Kolak and other members of his care team at Lahey will be tuning in to cheer him on.