Lahey Health has more than 1400 local providers in adult and pediatric primary care and almost every medical specialty. Find your team today. 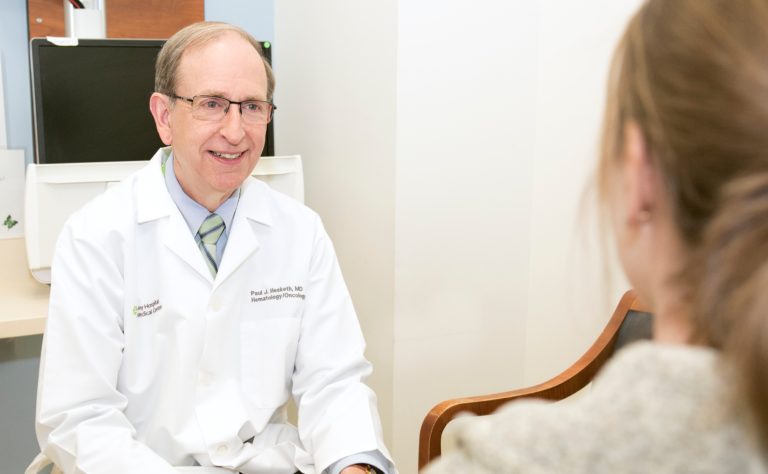 Paul J Hesketh, MD, FASCO, wears many hats – among them Director of the Lahey Health Cancer Institute, Director of the Sophia Gordon Cancer Center, Director of Thoracic Oncology at Lahey Hospital & Medical Center, and Professor of Medicine at Tufts University School of Medicine. But as an oncologist, his role as a provider is a special one.

“Cancer care is an area of extraordinary advances,” he says. “It’s gratifying to develop patient relationships and to be able to offer hope and opportunities. Cancer is not always curable, but we are increasingly making cancer a chronic disease that people are living with, and with a good quality of life.”

Dr. Hesketh has a broad interest in research, with a particular focus on new treatment approaches for lung cancer and support for patients who are living with cancer. Even for people with stage 4 cancer, who in the past may have had just months to live, exciting new treatment options are extending their lives by years.

“Cancer is not a single disease, but rather hundreds of diseases that are genetically different,” he explains. “We now have specific therapies to put many of these diseases into remission and keep them there for a number of years.”

Dr. Hesketh holds leadership roles on various national committees dedicated to improving cancer survival and establishing treatment guidelines for cancer specialists. He, has lectured nationally and internationally, and has authored more than 225 scientific manuscripts, abstracts, and book chapters. He also serves as a member of the leadership team of the Lung Committee of SWOG, a nationwide clinical trials group sponsored by the National Cancer Institute, and is the Principal Investigator for SWOG at Lahey Hospital & Medical Center.

What he especially enjoys about his work at Lahey, he says, is the ability to offer patients the best of both worlds – personal attention from experienced community-based providers, along with access to national and worldwide clinical trials and connections to some of the top minds in the field of oncology.

“At Lahey our patients benefit from our clinical model, where they are cared for by experienced physicians who are employed by the same health system and are connected to each other,” he points out. “So our patients have access to any area of medicine they may need in a timely fashion and to physicians who work collegially toward a common goal.”

Dr. Hesketh’s interest in oncology was sparked in his fourth year of medical school, when he recognized the impact he could have on the lives of others while using a broad range of skills as a physician. He is sometimes asked why he focused on an area of medicine where lives are threatened or lost.

“Obviously it’s very sad at times, and you need to be appropriately honest with people,” he says. “But it also can be extraordinarily gratifying, such as when you do an analysis of someone’s type of cancer and find a specific mutation that we can target.”

Recent insight into the role of the body’s immune system has led to new biologic therapies which, instead of targeting the cancer cells, target the immune system to attack cancer directly. These types of therapies tend to have fewer side effects and are less likely to impact a person’s quality of life as they go through treatment.

In fact, there has been so much success in retraining and recalibrating patients’ immune system, he says, that with many people with previously incurable cancer surviving for so much longer, “we’re wondering whether some of them could be considered cured.”