ALERT: Learn more about our Visitor Policy and COVID-19 Resources.

How Do I Know It’s An Allergy?

Lahey allergists primarily use skin tests to determine whether a patient has antibodies in the skin that react to a specific allergen. These tests use diluted extracts from allergens such as dust mites, pollens or molds commonly found in the local area. The extract of each allergen is applied to a tiny prick or puncture made on the patient’s arm or back, or administered intradermally, somewhat like a TB test. With a positive reaction, a small, raised, reddened area (called a wheal) with a surrounding flush (called a flare) will appear at the test site. The size of the wheal gives your Lahey physician an important diagnostic clue, but a positive reaction does not necessarily prove that a particular allergen is the cause of a patient’s symptoms. 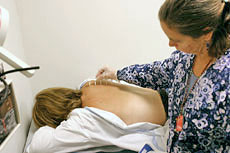 Patients who are scheduled for skin test, should review the instructions on how to prepare and which medications to stop in advance.

Skin testing is the most sensitive way to identify allergies in people. However, some patients, such as those with widespread skin conditions such as eczema, cannot be tested using that method. The alternative is a diagnostic test that uses a blood sample from the patient to detect levels of immunoglobulin E antibody to a particular allergen. These tests are known as radioallergosorbent (RAST) tests. A newer blood test methodology, commercially known as ImmunoCAP, is especially effective at diagnosing food allergies in children.

Seasonal allergic rhinitis, often referred to as hay fever, affects about 10 percent of the U.S. population. Substances called allergens, of which the most common is pollen, cause this seasonal allergy. A wide variety of grasses, trees and weeds release pollen in the spring and fall, causing the runny nose and itchy, watery eyes associated with hay fever. Depending on where they live, different people will be allergic to different pollens at different times of the year.

There are thousands of types of molds, but only a few are recognized as allergenic. The spores, or reproductive parts of the mold, are carried in the air and can cause allergic rhinitis in some people. While not seasonal, molds are affected by wind, rain and temperature. They typically flourish in moist, shady areas outdoors and in damp basements, bathrooms or closets in the home. Molds in certain foods, such as cheese, can also trigger symptoms.

A dust mite is a microscopic organism found in all homes and workplaces. House dust mites live in bedding, upholstered furniture and carpets. Certain proteins in the mites and their waste products provoke an allergic reaction in some people. Similarly, proteins in the saliva and waste products of cockroaches are also known to be allergenic. All of these allergens are carried by the air and, when breathed in, can trigger a reaction.

Allergies to animals are a common cause of rhinitis and asthma. Household pets (most often cats and dogs) are the principal cause of animal allergies, but other animals such as rabbits and horses or rodents such as rats, guinea pigs and hamsters are also frequent triggers of animal allergies. Allergy causing proteins from animals known as allergens are often found in public places such as schools or offices where animals are not normally permitted. These allergy proteins stick to clothing and shoes and can travel from place to place contaminating indoor environments.

Dander (the skin that flakes off cats and dogs) gives rise to small airborne allergy particles which produce allergic symptoms when inhaled into the nose or lungs, or after coming in contact with the mucous membranes of the nose, throat or eyes. Saliva from pets may also be a source of allergen. Some people develop hives when licked by dogs. Rodents shed protein in their urine, which can be very allergenic. The urine becomes aerosolized and stays airborne for long periods of time.

There is no such thing as a non-allergenic cat or dog. Some smaller species of dogs may shed less allergen in the indoor environment than a large hairy dog such as a golden lab or German shepherd.

Allergies to medications account for 5 to 10 percent of all adverse drug reactions. Skin responses such as hives are the most common symptom, but anaphylaxis, a life-threatening condition, can also occur. Drug allergies occur when the body responds to the modified or unusual proteins in certain medications, and symptoms can appear at any time – from within a few hours to a couple of weeks. According to the National Institutes of Health, penicillin is a common cause of drug allergy. Anaphylactic reactions to penicillin cause an estimated 400 deaths annually, making penicillin allergy a more common cause of death than food allergy. Please tell your Lahey physician about any existing drug allergies and any unusual symptoms experienced after taking a new medication.

A food allergy results when an individual’s immune system overreacts to an ordinarily harmless food. Symptoms might include hives, swelling, vomiting, difficulty breathing, throat constriction and/or a loss of consciousness. Food intolerance is sometimes confused with food allergy. Intolerance differs from an allergy in that it does not involve the immune system. For instance, an individual may have uncomfortable abdominal symptoms after consuming milk. This reaction is most likely caused by a milk-sugar (lactose) intolerance. Your Lahey allergist can help you determine whether your condition is food intolerance or a true allergy by taking a careful history and performing either skin or blood allergy tests.

In adults, the most common foods to cause allergic reactions include the following:

In children, the pattern is somewhat different. The foods most commonly found to cause reactions in children are these:

Adults usually do not lose their allergies, but children can sometimes outgrow them. Children are more likely to outgrow allergies to milk or soy than allergies to peanuts, fish or shrimp.