ALERT: Learn more about our Visitor Policy and COVID-19 Resources.

Laparoscopy and hysteroscopy also are available as safe and effective alternatives to more invasive traditional surgery for women with conditions such as endometriosis, fibroids, ovarian cysts, and abnormal bleeding. 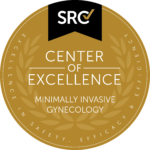 Lahey gynecologists are recognized leaders in performing this innovative surgery, and they actively present on minimally invasive hysterectomies at national and international conferences. In addition, the department is accredited as a Center of Excellence in Minimally Invasive Gynecology by the Surgical Review Corporation, which is focused on improving the safety and quality of patient care.

These arms, controlled via the da Vinci system interface, increase the surgeon’s dexterity by filtering out tremors and allowing for 360-degree rotation of surgical tools. The end result is enhanced surgical precision and control that refines and improves the already impressive benefits of laparoscopic surgery.

The da Vinci system also offers better visualization of anatomy, which is critical for surgeons when working around delicate and hard-to-reach structures such as the large pelvic blood vessels.

Robotic procedures available at Lahey include:

Hysteroscopy involves visualizing the inside of the uterus with a camera inserted through the cervix, to help diagnose abnormalities within the lining of the uterus. No abdominal incisions are necessary.

Some of the conditions treated with hysteroscopic surgery include:

Some of the hysteroscopic procedures that Lahey gynecologists perform include:

Laparoscopy in gynecology involves examining the reproductive organs with a miniature video camera inserted through a tiny incision in the belly button. When surgeons are not sure what is causing a woman’s pain, a diagnostic laparoscopy can help them view the pelvic organs to find the source of the pain.

Some of the conditions treated laparoscopically include:

Some of the laparoscopic procedures that Lahey gynecologists perform include: