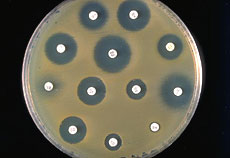 Resistance to antibiotics was observed soon after these drugs were introduced into clinical medicine, but the phenomenon has increased in frequency and importance in recent years. Bacteria are highly adaptable and can develop resistance by mutation or by the acquisition of resistance genes from other organisms. The magnitude of the resistance problem varies by the specific antibiotic and pathogen (disease-causing organism). For example, despite years of exposure to penicillin, group A streptococci bacteria remain just as penicillin-susceptible as they ever were, but Staphylococcus aureus acquired a resistance to penicillin within a decade of its first use.

In general, pathogens acquired in the community are more susceptible to antibiotics than those acquired in the hospital. Furthermore, hospital-acquired bacteria are more likely to be resistant to multiple antibiotics. Unnecessary antibiotic use is a major factor in resistance development, so antibiotics are not prescribed when they can be of no benefit, as in viral infections. Lahey restricts the use of several of the most powerful antibiotics to infectious disease experts and other specialists, and we also monitor overall antibiotic use to ensure that it remains appropriate.