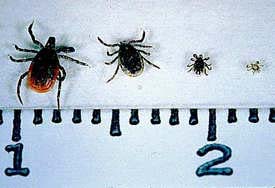 Over the past 25 years, Lyme disease has evolved from a mysterious focus of childhood illness in rural Connecticut to the most common tick-borne illness in the United States. A great deal has been learned, both about the cause and the clinical manifestations of Lyme disease, yet some of the mystery persists. Careful study has helped to dispel some of the confusion and anxiety surrounding this illness. 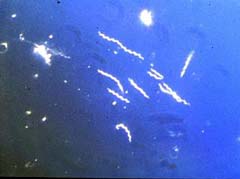 Lyme disease is caused by Borrelia burgdorferi, a spirochete that is carried by the deer tick, Ixodes scapularis. As suburban neighborhoods have reached further into wooded areas, deer and mice bring infected ticks into human contact. Most cases in the US have been concentrated along the northeast Atlantic coast, from Maryland to Maine, with another focus in Wisconsin. Beginning in springtime, deer tick nymphs, about the size of a period at the end of a sentence, can attach to a human host. If allowed to remain attached for more than 24 to 36 hours, they can feed on the human host’s blood and (if infected) transmit Lyme disease.

Lyme disease usually appears several days to two weeks after a tick bite. A large, red rash may accompany fever, muscle and joint aches, headache, and malaise. This is often described as donut- or ring-shaped, and typically appears at the site of the bite. The rash may be as small as 5cm (2 inches) in diameter, or may expand to cover the chest, abdomen, or an entire limb. Sometimes it will appear with multiple rings that may move around on the skin (erythema migrans). Untreated infection may resolve itself or progress to later stages of infection.

The most common long-term manifestation of Lyme disease is joint involvement, or arthritis. This can produce intermittent bouts of swelling and pain, usually in large joints, such as the knee. If untreated, some cases will become chronic. Less commonly, neurological infection can occur. This may cause meningitis (with headache, fever, and stiff neck) or a facial droop (Bell’s Palsy). Infection of the heart is fairly rare, but can cause a brief blockage of electrical conduction in the heart muscle. Each of these conditions is amenable to treatment with antibiotics.

Although Lyme disease can cause many conditions, complaints of common symptoms such as fatigue and aches are often incorrectly attributed to Lyme disease when another condition is to blame. When considering Lyme disease, it is important to assess three major issues: the likelihood of exposure to Lyme-infected ticks; whether a typical illness occurred; and the results of blood tests.

After infection with B. burgdorferi, two major types of antibody can be detected in blood. Immunoglobulin M (IgM) is a rapid-response antibody that typically appears within one to three weeks of infection and then disappears over the next three to six months. Immunoglobulin G (IgG) is a more long-lasting antibody, appearing several weeks into the infection and often lasting for years. Testing for these antibodies can help immensely, but requires the assistance of a reputable laboratory.

A screening test (EIA) is first used as a sensitive search for exposure to Borreliae. If this suggests there has been an antibody response, a more careful test (Western blot) is used to discern B. burgdorferi infection from cross-reacting antibodies. Scientists from the fields of infectious disease, rheumatology, and laboratory medicine have established standard criteria for diagnosing and interpreting these tests. Although most cases of Lyme disease produce clear-cut antibody results, testing too early in the course of illness (e.g., when a rash first appears) will not detect infection about half the time. In contrast, antibody responses in later disease, such as arthritis or neurological infection, are almost always positive.

Prevention of Lyme disease and other tick-borne infections includes wearing long sleeves and tucking in pants when in tick-infested areas. Careful inspection and removal of ticks as soon as possible prevents transmission. Insect repellents containing DEET are effective in repelling deer ticks. Lyme vaccine is no longer available for human use. It is notable that death from Lyme disease is exceedingly rare.

Other tick-borne infections may be found in the Northeastern US, although less commonly than Lyme disease.

Babesia microti is a protozoan that parasitizes red blood cells, causing anemia. This is generally a self-limited disease of low severity. However, bites from deer ticks infested simultaneously with both Lyme disease and Babesiosis can cause more severe symptoms. In addition, patients who have had a splenectomy are subject to more severe (occasionally fatal) illness. 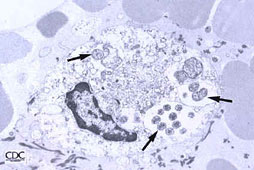 Ehrlichiosis occurs in two predominant forms; human granulocytic Anaplasmosis(HGA) and human monocytic Ehrlichiosis (HME). The latter is rare in the Northeast, where HGA is most common. Similar to Babesiosis, HGA can cause co-infection with Lyme disease, again associated with more severe symptoms. HGA alone can cause significant fever, aches, and prostration, sometimes with a fatal outcome. Prompt treatment with doxycycline is highly effective.

Tularemia, caused by Francisella tularensis, can range from skin ulcers and swollen lymph nodes to severe pneumonia and a frequently fatal illness similar to typhoid fever. Tularemia is most often associated with contact with rabbits. Infection can occur by direct contact, through tick bite, or by inhalation. 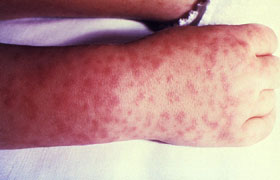 Rocky Mountain Spotted Fever (RMSF) is caused by Rickettsia rickettsii, a species of bacteria that is spread to humans by ixodid ticks. Initial signs and symptoms of the disease include sudden onset of fever, headache, and muscle pain, followed by development of rash. The disease can be difficult to diagnose in the early stages, and without prompt and appropriate treatment, it can be fatal.

The American Lyme Disease Foundation, Inc.: A proactive organization dedicated to the prevention, diagnosis, treatment and control of Lyme disease and other tick-borne infections. The Foundation supports critical scientific research and plays a key role in providing reliable and scientifically accurate information to the public, medical community and government agencies about tick-borne diseases and their potentially serious effects on our health and quality of life.