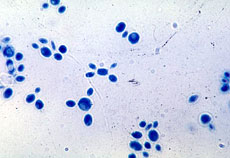 There are more than a million species of fungi, but only about 400 cause diseases in humans, animals or plants. Fungi are multicellular (eukaryotic) microorganisms whose genetic material is contained within a cell nucleus. Fungi require preformed organic compounds for energy and do not contain chlorophyll.

There are two broad groups of fungi: yeasts and molds. While these definitions are not mutually exclusive, mold spores germinate to produce the branching filaments known as hyphae. Yeasts are solitary rounded forms that reproduce by making more rounded forms through mechanisms such as budding or fission.

This is an excellent site primarily intended for physicians, but it includes introductory material written with minimal medical terminology, so it can be used by patients who wish to further their understanding of their illness.