Minutes matter when dealing with a stroke. Stroke is the third-leading cause of death in the United States and the first-leading cause of disability. At Lahey Hospital & Medical Center, our rapid response, expert intervention and highly skilled Stroke Neurologists, Interventional Neuroradiologists, and Neurosurgeons have saved countless lives and made a very real difference in their recovery.

Similar to a heart attack, a stroke is a “brain attack” – an interruption of blood flow to the brain. There are two types of stroke:

A stroke is a serious emergency, and most people don’t have a choice of where to go for emergency treatment. But if you or someone you love has the opportunity to choose – or is stabilized elsewhere and needs immediate, specialized care – Lahey has the team and the technology to provide the best care possible.

It’s vital to know the warning signs of stroke and what you can do to reduce your risk of stroke. 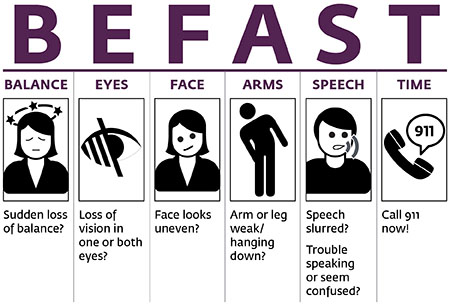 A helpful way to remember the warning signs is to BE FAST:

Stroke has three treatment pathways: prevention, immediately after a stroke, and post stroke:

The American Heart Association and American Stroke Association recognize this hospital for achieving 85% or higher compliance with all Get With The Guidelines – Stroke Achievement Measures and 75% or higher compliance with five or more Get With The Guidelines – Stroke Quality Measures for two or more consecutive years and achieving Time to Intravenous Thrombolytic Therapy ≤ 60 minutes in 50% or more of applicable acute ischemic stroke patients to improve quality of patient care and outcomes.

For more information about the Department of Neurology at Lahey Hospital & Medical Center, or to make an appointment, please call 781.744.1270.

We also invite you to visit our Neurology homepage and see links below for more information and treatments for stroke.

If you are a survivor of stroke, Lahey offers a Stroke Survivor group free of charge to both the survivor and family. You do not need to be a Lahey patient to attend a group meeting. The group meetings are held the third Tuesday of each month at the hospital from 6pm to 7:30pm. For more information- contact Jayna Kraslin at [email protected] 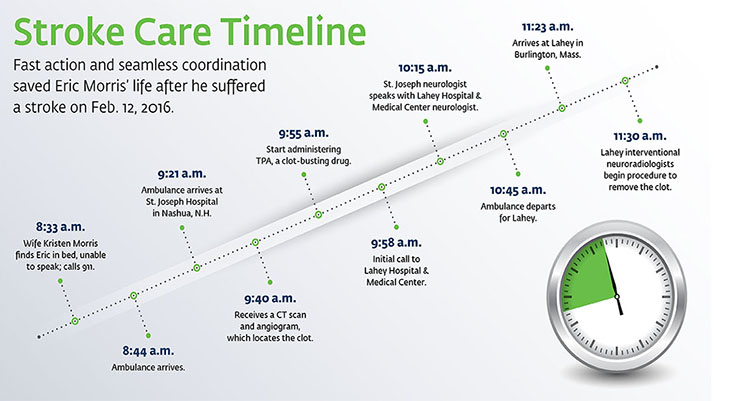 The morning of Feb. 12 began as most did for the Morris family. Around 8 a.m., Eric Morris was getting ready for work upstairs in his Brookline, N.H. home, while his wife Kristen prepared lunches downstairs for their two teenage daughters.

Less than 12 hours later, Morris was 35 miles away in a hospital bed – recovering from a massive stroke that almost took his life. Thanks to a series of flawless handoffs between care teams and an emergency clot-removal procedure, the 41-year-old is now back home enjoying his second chance at life.

“The whole experience is a little fuzzy,” Morris said. “I have a lot of people to thank, because I wouldn’t be here if it weren’t for them.”

That morning, Morris was in the shower when he “started to feel really weird.” He got out of the shower and — hair wet, wrapped in a towel — lay down in bed. Minutes later, he got up and attempted to get dressed, but fell over while putting on his pants. When he tried to call to his wife, no words came out. He crawled back into bed, terrified and confused. That’s where Kristen Morris found him when she came to check on him because he was supposed to be driving his daughters to school.

“Eric not being able to talk at all was incredibly scary, especially seeing how scared he was,” Kristen Morris said. “It was almost like you’re watching TV. You’re wondering ‘How is this going to end?’ and then you realize, ‘Oh my God, this is my life.’”

Morris was rushed by ambulance to St. Joseph Hospital in Nashua, 25 minutes away. The crew recognized that Eric was having a stroke, and alerted the emergency room staff that he was en route. 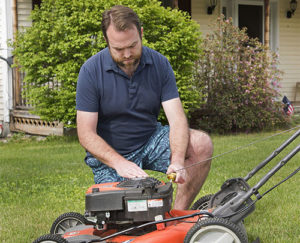 He arrived there just over an hour after his initial symptoms – within the critical window of time clinicians can administer treatments to minimize permanent brain damage. The team – including stroke coordinator Sue Barnard, MS, RN, APRN, CCRN, neurologist Khawaja Rahman, MD, and emergency physicians and nurses – responded rapidly. In less than 90 minutes, Morris had received a CT scan, an angiogram and a clot-busting drug known as TPA.

They decided to transfer Morris to Lahey Hospital & Medical Center in Burlington, Mass., a St. Joseph Hospital affiliate, where he could receive further treatment from a multidisciplinary team of specialists with experience in advanced stroke intervention.

“Because of this collaboration, we’re giving people a new option,” said Barnard. “Our patients ultimately benefit and are getting better care because of it.”

Upon arrival at Lahey, a team including emergency medicine physicians, stroke and interventional neuroradiologists and neurocritical care doctors were ready and waiting.

“Eric was having a very big stroke,” said Dr. Burns, a neurocritical care doctor who was part of Eric’s care team. “St. Joseph did an excellent job acting quickly and getting him to us fast.”

Eric was in an operating room within minutes. Interventional neuroradiologist In Sup Choi, MD, placed stents in Morris’ carotid artery, which was closed off, and removed a clot, part of which had traveled up to a hard-to-reach area of his brain.

“Because we intervened so quickly — before permanent damage to the brain had happened — he was able to regain his speech,” Dr. Choi said.

The morning after the procedure, Eric was able to say a few words. Three months later, he is working with a speech therapist weekly and has made tremendous progress.

“I’m relearning all the things you’re taught in first and second grade, but I’m getting better every day,” he said.