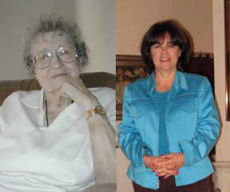 My family has always depended on Lahey for excellent medical care, which has ranged from state-of-the-art prostate cancer surgery to routine care from Dr. Erica Frank. Recently, we became aware of your Palliative Care Service. My husband and I were overwhelmed by the sensitivity and caring of these kind people.

As my mother, Sylvia French, entered end-stage renal failure, we again turned to Lahey. Dr. Christopher Ying, her nephrologist, not only saw her, but also came back to see us to give us emotional support. Over the years, we have grown to not only respect him, but also to appreciate his attitude toward education, as well as his ability to treat his 88-year-old patient with humor and intelligence.

That final week was both the worst and best of our lives. The team gave us the ability to bond and release. Watching a loved one die is difficult, but there were also so many tender and special moments. Dr. John Przybylski, her primary care physician for years, visited her many times a day. I still see him kissing her forehead and saying goodbye. We were amazed when Joyce Shannon, Lahey’s senior vice president, Clinical Services, not only came to visit my mom, but also added, “This is the most important part of my day.” She also had guest food trays sent up for my husband and me.

The staff was so kind to us, and it meant so much. The nurses, the unsung heroes of the hospital experience, were gentle and thoughtful. Two nurses, both named Shannon, made us tea, stroked my mom’s hand, and were always so caring. My mom was treated with such affection by strangers.

Dr. Elizabeth Collins was a guiding, gentle and powerful force. She gave us her beeper number, helped with dialogue and explained what to expect. But, more than that, she gave my mom respect, dignity and genuine affection. When Dr. Collins learned of my mom’s enjoyment of music, she arranged for a harpist to give a private performance for my mother, my husband and myself. This was such a special moment. My mother appreciated the “sounds that didn’t start or end in a traditional song, but rather just led the way to peace.” As dramatic as this sounds, it truly felt like an angel had arrived in her room to help her die. Touches like this make Lahey a leader.

We had a memorial service and asked that donations be given to Lahey in lieu of flowers. We were so impressed by Lahey’s excellence, we even had the minister mention my mom’s special week at “her second home.” We were so touched that Dr. Collins attended the service.

Thank you, Dr. Barrett. Your leadership has made such a difference. We’ve always expected you to hire quality personnel and provide state-of-the-art equipment, but providing such a kind and peaceful way to die is another way that Lahey outranks other hospitals.