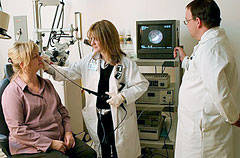 Swallowing is a complex and well-orchestrated process that requires the utilization of more than 35 muscles to complete a single swallow. The human body is so well adapted to this process that it usually takes more than a single injury or subtle disturbance to cause a swallowing problem. However, the consequences of disturbances or breakdowns in the process can be severe. Swallowing disorders (dysphagia) have a variety of underlying causes including stroke; neurological disease, such as multiple sclerosis and ALS (Lou Gehrig’s disease); head and neck cancers; or the side effects of surgery, chemotherapy or radiation used to treat head and neck cancers. Less common (but also less serious) disorders may also lead to swallowing problems.

Serious complications can result from swallowing disorders. Among them are dehydration and aspiration pneumonia, caused when food goes down the windpipe instead of the esophagus. Promptly undergoing a diagnostic swallowing test and effective treatment is critical.

The physical sensation of not being able to swallow is not the only sign of a swallowing disorder. Other symptoms can lead to early detection and prompt treatment. Among them are the following: 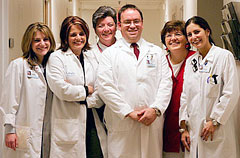 Clinicians at Lahey’s Department of Speech Pathology believe that you, the patient, are best served by a multidisciplinary approach to swallowing disorders. This means that you will see a team of swallowing specialists for your initial evaluation and diagnosis. Most patients will initially see an otolaryngologist (ear, nose and throat physician) and a speech-language pathologist (swallowing therapist). We work closely with a number of other specialists, including gastroenterologists, neurologists and allergy/immunology physicians as needed.

Clinicians at Lahey are among the first in New England to begin using a new diagnostic tool known as FEESST (functional endoscopic evaluation of swallowing with sensory testing). FEESST is performed with a flexible endoscope that has a tiny camera attached. The clinician can view the anatomy, physiology and mechanics of swallowing and assess the patient’s ability to protect his or her airway. At the same time, the patient is given various foods and liquids so a comprehensive swallowing evaluation can be performed.

FEESST can be performed in the office or at the patient’s bedside. Depending on the patient’s underlying diagnosis, FEESST may be repeated as needed to monitor progress without exposure to radiation such as that used in the traditional method of swallowing evaluation, the modified barium swallow. In some cases, the modified barium swallow may also be necessary. For it, the patient swallows a form of barium while X-rays are taken to assess the oral, pharyngeal and esophageal phases of the swallow.

Drug therapy, surgery and modification of diet or feeding techniques are all possible treatments for swallowing problems, depending on the cause and severity of the disorder. Your doctor and medical team will work with you to determine the best treatment approach for your particular condition.