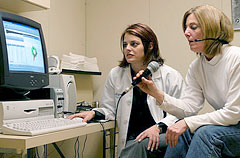 Ironically, the voice box (larynx) is not actually designed for speech. Humans have learned to use it for speech, but that really isn’t its primary function; rather, it is there to separate the food tube from the breathing tube. However, for anyone with a voice or speech disorder, that primary function is of secondary importance.

The voice box consists of cartilage, muscle, the epiglottis (which helps protect the voice box during swallowing) and the vocal folds (vocal cords). Muscles control the movement of the vocal folds, which open to allow breathing and close to allow speech. Problems can occur anywhere within this area, leading to a variety of symptoms, diagnoses and treatments.

There is a wide array of voice disorders that can be classified into various groups (e.g., inflammatory disorders, problems caused by overuse or misuse, vocal cord growths and neuromuscular disorders). At Lahey Hospital & Medical Center, we have the expertise and technology to diagnose and treat all of them, including rare and often misdiagnosed conditions. These are some of the more commonly seen types of voice problems:

Common symptoms of a voice disorder include:

Hoarseness is the most common symptom of a voice disorder. Anyone who has had hoarseness for more than a week should see a doctor. In most cases, hoarseness and other voice problems are a result of vocal abuse and overuse. In some cases, however, hoarseness may be a symptom of vocal cord paralysis, neurologic disease, acid reflux, thyroid disorders or cancer. Other voice symptoms may be the result of infectious diseases, such as Lyme disease, syphilis or a fungal infection, or a symptom of previously undiagnosed asthma or lung disease.