“Normally I would never be so vocal about this because, let’s be honest, the topic of incontinence is embarrassing. However, after living with incontinence for 20 years I feel compelled to tell my story to help other women who are living in silence.”

Becky lived in silence for much of her life. She remembers being a 17-year-old cheerleader and dealing with urinary incontinence (UI). Urinary incontinence, the loss of voluntary bladder control which leads to urine leakage, can be temporary or chronic. In Becky’s case, it was chronic and she suffered with the issue and the embarrassment for years.

After giving birth to her daughter, Becky’s UI became quite a bit worse. She could no longer exercise, dance, or even play with her little girl without having to excuse herself to run to the bathroom. Eventually, Becky decided enough was enough. She decided to get herself some help.

Becky began her research the way many people do: she went online. That’s where she first learned about Lahey Hospital & Medical Center’s Urology Institute and discovered Dr. Arthur Mourtzinos.

Turning to an Expert

Being an expert in female urinary incontinence, Dr. Mourtzinos was able to quickly diagnose Becky’s problem and present her with a variety of treatment options. These options ranged from conservative physical therapies to minimally invasive surgical procedures. At Lahey, there are specialized physical therapists who work with women to help them strengthen the muscles of their pelvic floor. These exercises, called Kegel exercises, can be incredibly effective in helping women gain control of their bladder. There are also several minimally invasive surgical procedures ranging from an injection into the urethra to a sling procedure. Each of these procedures can elicit dramatic results for patients and, more importantly, a return to the lifestyle they want to live. 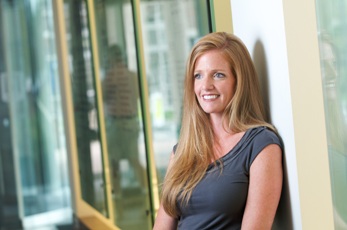 “It was the single best decision I ever made. I only wish I had done it sooner. It absolutely changed my life for the better.”

After discussing her options with Dr. Mourtzinos, Becky decided to have the sling procedure. She says she was drawn to the procedure because it was so straight-forward and the recovery time was minimal. Several months later, Becky is still thrilled with her choice.

Urinary Incontinence Surgery Changed My Life: Hear how treatment improved Becky's life and how it can change yours.

We recognize the frustration that patients experience as a result of incontinence. Our urology experts collaborate to develop highly individualized treatment plans.