See All Providers
Back to Health Resources

In 2017, for the first time ever, more women enrolled in U.S. medical schools than men did. It was only a slight majority — 50.7 percent— but still worthy of celebration this Women’s History Month. In light of this achievement, it’s important to recognize the many historic female physicians who helped make this possible.

One such woman was Dr. Sara Murray Jordan, a gastroenterologist who blazed trails for women doctors today and who played a central role in the history of Lahey Clinic.

When Dr. Jordan entered medical school in 1917, women had been practicing medicine for nearly 70 years but were still underrepresented within the field and in medical schools. Dr. Jordan was 33 years old, separated from her husband and raising their daughter on her own. She already had a Ph.D. from the University of Munich — but according to Gail Hecht, the second woman president of the American Gastroenterological Association (AGA), Jordan’s lifelong dream was to be a physician.

She was accepted into Tufts Medical School on probationary status, under the condition that she also take chemistry and zoology courses. When she met these conditions but still wasn’t released from probationary status, she called for an investigation by the American Medical Association and quickly became a full-fledged medical student.

Dr. Jordan excelled in her studies, and during her second year of medical school, the well-known surgeon Dr. Frank Lahey invited her to take part in his clinical studies at the New England Deaconess Hospital. Their research on thyroid function and metabolic rate became the basis of her first scientific paper, “Basal Metabolism as an Index of Treatment in Diseases of the Thyroid,” which Dr. Lahey co-authored.

She graduated in 1921 at the top of her class, moved to Chicago to work with a leading gastroenterologist and then moved back to Boston, where she soon joined the new Lahey Clinic.

When Dr. Lahey founded his group practice in 1923, he had an unconventional vision — to create a clinic where different specialties worked under one roof. This was highly unusual at the time, but within a decade, newspapers were calling it the “World-Famous Lahey Clinic.”

Dr. Jordan and anesthesiologist Lincoln Sise were among the clinic’s founding members, and both were pioneers in what were fairly new fields. Not only did they see outpatients at the clinic, but they also performed surgeries and treated inpatients at three Boston hospitals: New England Baptist, New England Deaconess and Peter Bent Brigham.

Their shifts were long — often more than 24 hours — but the hard work paid off. By the 1930s and ’40s, Lahey was known worldwide for its state-of-the-art treatment of thyroid, gastrointestinal and gallbladder disorders. 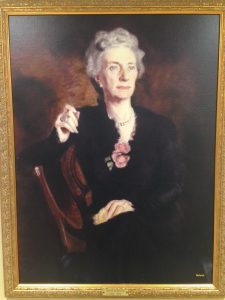 As head of the gastroenterology department at Lahey, Dr. Jordan quickly made a name for herself. Her work was widely published in medical journals, and in 1942, she became the first woman president of the AGA. She later served as secretary, vice chairman and chairman of the American Medical Association’s Section on Gastroenterology.

Dr. Jordan treated a number of famous people with peptic ulcers and became known for her catchy medical advice. She was widely quoted as saying that “every businessman over 50 should have a daily nap and nip — a short nap after lunch and a relaxing highball after dinner.” She also recommended the stomach-soothing “Jordan Highball,” made with one part orange juice and one part hot water.

A strong proponent of exercise, rest and healthy eating, Dr. Jordan even wrote a cookbook. Encouraged by her patient, Harold W. Ross — then-editor of The New Yorker — she partnered with the magazine’s culinary expert to write “Good Food for Bad Stomachs” in 1951. That same year, she was one of five women to receive the Elizabeth Blackwell Citation for the teaching and practicing of medicine.

Dr. Jordan spoke often about women’s issues, always insisting that “femininity need not conflict with professional achievement.” In a 1954 article titled “The Woman Doctor of Today,” she wrote that “sex prejudice” from male physicians had existed in the past, but she felt this sentiment “no longer exists in medicine today.”

Her perspective was perhaps a bit optimistic for the time, but it was also empowering to generations of women who would become doctors long before the odds were in their favor.

A Part of Lahey History

Thanks in large part to Dr. Jordan’s contributions, Lahey Clinic continued to grow in size and national importance. In 1971, more than 2,000 Burlington voters, the largest number ever to attend one of the town’s meetings, voted in favor of the construction of Lahey Clinic Medical Center in Burlington.

Sadly, Dr. Jordan never got to see the new building or to witness Lahey transform into a multi-hospital health system with clinics in two states. She died in 1959 at age 75, after diagnosing herself with colon cancer. But her legacy lives on at Lahey Health and in the field of medicine.

Hecht puts it this way:

“I was often told that Dr. Jordan gained this position [as president] because ‘all of the men were away at war.’ My bottom-line assessment is that she was ahead of her time, progressive in her thinking, strong-willed, ambitious and perhaps a bit feisty. How else could she have risen to this position at this point in time?”