If Robotics Is An Option, I’d Say Go For It: One Patient’s Experience With State-of-the-Art Surgery

After seeking care for a cough that wouldn’t quit, Genevieve Bomes of Milford, Mass., found herself facing surgery to remove a noncancerous tumor in her chest that was causing her symptoms. Her journey led her to thoracic surgeon Christina Williamson, MD, at Lahey Hospital & Medical Center, who removed the mass with tiny incisions and a state-of-the art surgical robot. 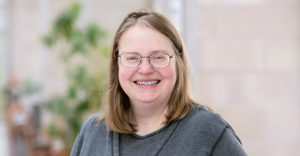 “With regular surgery, I was told I was looking at a six- to eight-week recovery, but with robotic surgery it would be two to three weeks,” Ms. Bomes said. “In fact, I was out of the hospital in two days – surgery on Friday and home Sunday evening – and I actually went to a concert the following Friday.”

The type of mass in Ms. Bomes’ chest was a large neurogenic tumor that was close to her aorta, a major artery of the heart, Dr. Williamson explains. Although benign, the tumor can invade into the spinal canal through the nerve roots as it grows and result in a more complicated procedure.

“In the past, we would perform a thoracotomy, in which we would make a large incision and spread the ribs to take out the tumor, or perform a video-assisted thoracoscopy, which is a minimal-access procedure through small incisions,” she said. “In this case, we were able to remove it using robotic surgery through even smaller incisions with less trauma to the chest wall. I like to refer to this as minimal-access surgery because it’s done through small incisions even though we’re still performing major surgery.”

The surgical robot cannot move by itself. Instead, the surgeon inserts instruments, and a high definition camera, through tiny incisions. She or he controls all of the movements of the camera and instruments while seated at a nearby console with magnified high-definition, three-dimensional imaging.

The robots at Lahey are the latest daVinci Xi model. Like the Si model they have “wristed” instruments that bend and rotate with greater range than the human hand as the surgeon moves her or his fingers and wrists. This gives the surgeon excellent dexterity and precision.

Ms. Bomes remembers being amazed when Dr. Williamson described how the robotic surgery is performed. “I didn’t know at all how it would be done, but Dr. Williamson is wonderful and can explain things thoroughly without it going over your head,” she said. “She told me the mass was close to my spine, in a hard place to get to, but the robot could get into places that doctors can’t reach with their hands,” she recalls.

The Journey to Lahey

Ms. Bomes’ journey to Lahey began when her doctor ordered an MRI and CT scan, which are what identified the mass in her chest. The doctor suggested surgery at Dana-Farber, and Ms. Bomes got as far as scheduling a pre-surgical visit before learning that her insurance would not be accepted there.

“So I had to start over and went to Lahey,” she said. “They told me I was a perfect case for robotic surgery. It’s a lot less invasive than normal surgery, and with almost no scars. Dr. Williamson really made sure I knew what the surgery would entail.”

Ms. Bomes’ surgery was a technically challenging procedure and even with the robotic approach was still a big operation, Dr. Williamson recalls. “The robot is advanced technology that allows me to be a better surgeon,” she said. “It produces magnified, high-resolution, three-dimensional, images, so my visibility is actually better than if I had opened the chest. The images are quite spectacular and allow me to do very precise surgery, carefully and more accurately.”

Explaining a procedure thoroughly to each patient is vital, Dr. Williamson believes. “Regardless of whether it’s robotic or open surgery, it’s always best to explain the procedure in commonly understood language,” she said. “It’s a critically important part of having patients understand and embrace what’s going to happen.”

All She Could Have Hoped For

Ms. Bomes said her experience at Lahey was all she could have hoped for. “The staff is just wonderful, and Dr. Williamson is very caring. She called to follow up after I had gone home, and she made sure I had her card and knew I could call her at any time.” 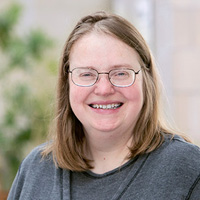 “If robotics is an option, I’d say to go for it. I didn’t even take painkillers that much, maybe just that first week, and then I was able to get on with my life.”

That personal connection with patients is one of the reasons Dr. Williamson went into medicine. “I think that the doctor-patient relationship is the most important and sacred part of our profession,” she explains. “To have patients trust me at a very vulnerable period in their life is the bedrock of our relationship. It helps me reassure my patients that I will treat them as if they were a member of my family.”

Twenty-five years ago, Dr. Williamson operated on a patient with an aortic dissection, a critical condition in which there is a tear in the aorta that causes blood to flow between the layers of the blood vessel wall. She recently received a bouquet of flowers from that patient to commemorate the anniversary of his lifesaving surgery.

“I called him up to thank him,” she said. “I reached retirement age two years ago and something like that is what keeps me going, the relationships I develop not just with patients but with families as well. There’s nothing more gratifying than that.”

As for Ms. Bomes, she has advice for others who may be facing similar surgery. “At Lahey the service was just great, and if robotics is an option, I’d say to go for it. It’s a lot less painful, and you can be in and out quicker. I didn’t even take painkillers that much, maybe just that first week, and then I was able to get on with my life.”